Kaiser Family Foundation graphs; for a larger version of any image, click on it.
—–
By Melissa Patrick
Kentucky Health News
The special open enrollment period for people to buy government-subsidized health insurance on the federal marketplace has been extended by three months to Aug. 15.
President Joe Biden announced the extension March 23, the 11th anniversary of the Patient Protection and Affordable Care Act becoming law. The special enrollment period was set to end May 15.
The special enrollment period includes enhanced premium subsidies, also known as tax credits, to help offset the cost of the marketplace’s health insurance plans. It also makes more people eligible for the subsidies and eliminates repayments that may be required when people reconcile their tax return with the tax credit they received.
The enhanced subsidies, along with several other health-related provisions, were authorized under the  $1.9 trillion relief-and-stimulus law and are aimed at making coverage more affordable for people who already have marketplace coverage, who are uninsured or have lost their employer coverage.
Open enrollment is usually open for only six weeks at the end of a year, except for those who experience a “qualifying life event,” like getting married or losing a job.
Under the American Rescue Plan, subsidized premiums will drop an average of $50 per person per month, according to a federal fact sheet. It also says four out of five enrollees will be able to find a plan for $10 or less per month after the tax credit, and most will be able to find a “silver” plan for $10 or less. Silver plans have the the second-lowest costs and are the benchmarks used to calculate the tax credits.
Under the ACA, only people with incomes between 100% and 400% of the federal poverty level  were eligible for a tax credit to reduce their premiums for marketplace coverage. 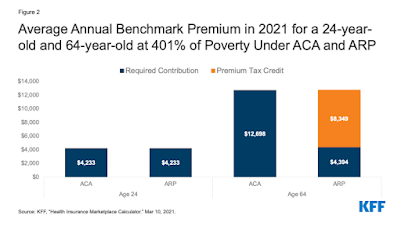 The American Rescue Plan removes that cap for two years and allow people with incomes above 400% of the poverty level ($51,040 for an individual) to be eligible for the enhanced subsides.

It also limits the amount a person would pay for a plan to 8.5% of household income, down from 9.83%. The federal government picks up the slack.
For example, Kaiser Health News reports that a typical single person who makes $30,000 a year will pay $85 per month for a silver plan instead of $195, according to an analysis by the Center on Budget and Policy Priorities. A family of four making $75,000 will pay $340 rather than $588 per month for similar coverage, the analysis found.
The Kentucky Center for Economic Policy reports that the American Rescue Plan’s provisions mean that many who earn between 139% of the poverty level ($17,900 for an individual) and 150% of the federal poverty level ($19,320 for an individual) can find plans with zero premiums.
In Kentucky, anyone earning up to 138% of the federal poverty line qualifies for Medicaid, which is free of charge.
The savings are available to both new and existing enrollees and will start on April 1. They will be available for two years. They will help the 77,800 Kentuckians who are already covered by marketplace plans, and open enrollment to more Kentuckians.
Kaiser Health News has a list of things to do to determine whether you qualify for an enhanced subsidy:
The Kaiser Family Foundation offers a Health Insurance Marketplace Calculator to help people estimate how much their marketplace coverage would cost with the relief bill’s changes.
The ARP also requires the federal government to pay 100% of COBRA insurance premiums for eligible employees who lose their jobs (and for their covered relatives) through September, allowing them to stay on their company-sponsored health plans. This provision is especially important for people with medical conditions because it allows them to keep their coverage and existing providers.
Previous ArticlePositive-test rate falls to 2.8%, about half of what it was 4 weeks ago; other pandemic metrics decline; death toll surpasses 6,000
Next ArticleNew-case and positive-test averages stable as U.S. numbers rise