When it comes to information about coronavirus vaccines, polling in late winter showed Kentucky adults overwhelmingly trust their physicians or other health-care providers, followed by pharmacists and local health-department directors.

“This poll shows we have to work on the local health level to get the facts about the Covid-19 vaccines out to Kentuckians,” said Ben Chandler, president and CEO of the Foundation for a Healthy Kentucky, which funded the poll.

The poll, taken Feb. 11 to March 12, found 98 percent of Kentucky adults said they either trusted their physician or other health-care provider a great deal (68%) or a fair amount (27%).

Pharmacists had 85% trust and health-department directors 74%.

The numbers for national public-health officials were similar, getting trust from 66% of Kentucky adults and 43% of those who said they would probably or definitely not get vaccinated.

“Trust for elected and appointed officials as sources of vaccine information reflected partisan divides, with Democrats more than three times as likely to report a great deal of trust than Republicans or independents,” the foundation’s news release said.

More broadly, friends and spiritual leaders got the two lowest scores for trusted information about coronavirus vaccines, 47% and 39%, respectively. The poll found that 67% viewed family as a trusted source of information.

The Kentucky poll didn’t ask if those who were not planning on getting vaccinated, but still trusted their physician or provider, had actually sought out advice about the vaccine. However, national polling by the Kaiser Family Foundation found that of the 79% who said they would likely turn to their physician or health-care provider when deciding to get a vaccine, only 24% had done so.

The poll’s error margin is plus or minus 3.5 percentage points. It surveyed a random sample of 807 Kentucky adults in landline and cellphone interviews. The foundation plans to survey the same people later this year.

In an open-ended question, asked of those who said they didn’t intend to take a vaccine, 34% said they didn’t know enough about them or that they were developed too quickly (the results were grouped together); 21% cited those two reasons plus concerns about long-term effects; 8% said they needed more information, and 5% said they weren’t getting it because they were not at risk.

Other reasons given for not getting a vaccine included: they didn’t trust the government or health officials; that Covid-19 is similar to the flu; that they already had Covid-19; or that they didn’t get any vaccinations or trust vaccinations, according to the foundation’s news release.

Only 6% of those polled said they could not take the vaccine due to health issues.

Kentucky Health News recently reported on what medical and public health experts have to say about each of these concerns and more. The foundation also has a page with such information and other resources.

In another open-ended question, those who had decided to get the vaccine were asked why; 16% said to protect themselves, 16% to protect family, and 12% to stop the spread of the virus. Other reasons included personal risks such as age or health status, knowing someone who had Covid-19, wanting to see family, or because of their job. 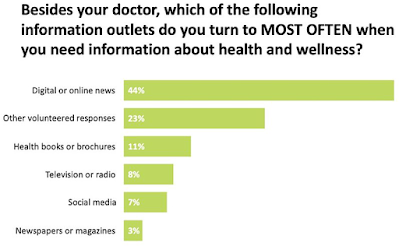 Other than their doctor, more than four in 10 Kentucky adults, or 44%, said they go to “digital or online news” most often when they need information on health and wellness.

That wasn’t a surprise, but confirming it enhances an opportunity, said Allison Adams, the foundation’s vice-president for policy.

Further, she said this is an opportunity for the most trusted sources, like physicians, pharmacists and local public-health officials, to create digital platforms with factual information and amass followers.

“What’s critical in the results of this poll is, if they need more information, and we know who their trusted messengers are, and where they’re getting their sources, we need to put all three of those together to launch that local campaign to move them into getting the vaccine,” Adams said.

Traditional news-media sources scored poorly in the poll, in which 23% volunteered a variety of other responses to this question, such as their doctors, friends, the internet, WebMD or Google, said the release. Eleven percent said they go to health books or brochures.

Call for action
In the release, Chandler called on trusted sources across the state to step up and encourage Kentucky adults who have said they wouldn’t get a vaccine, but are willing to change their minds.
In April, the foundation released results from the same poll showing that half of the nearly 30% of Kentucky adults who said they probably or definitely wouldn’t get a coronavirus vaccine might change their minds.
“Doctors, pharmacists, local health departments and family and friends – these are the messengers we need to get in front of Kentucky adults who are hesitant about the vaccine,” said Chandler. “And, we need them to get vaccinated if we’re going to have a shot at herd immunity.”

Herd immunity occurs when enough people in a population are immunized against a disease to give significant protection to people who are unwilling or unable to get vaccinated. Health experts aren’t sure, but say a vaccination rate of 75% to 80% is needed to reach herd immunity for the coronavirus.

Some experts recently warned that herd immunity is not achievable and that it’s time to get as many shots into arms as possible. That resignation seems to be evident in an announcement made Tuesday by  President Joe Biden when he set a new goal to deliver at least one dose to 70 percent of U.S. adults by July 4.

Kentucky has a way to go to meet this goal. The state’s vaccine dashboard shows 41% of Kentuckians have received at least one dose of a coronavirus vaccine. The Covid-19 State Profile Report for Kentucky, last updated on April 30, said about 32% of the state’s population is fully vaccinated.

The foundation and its partners have launched two campaigns to encourage Kentuckians to get vaccinated: the I Got the Shot campaign and the Take it From Me campaign.

Previous ArticleNew Covid-19 vaccinations keep plunging; Ky. gave only 1,524 first shots Monday, as cases and positive tests kept ticking up
Next ArticleAgriculture Commissioner Quarles calls on Beshear to set a date to reopen the state and ditch his goal of 2.5 million vaccinations