From “Understanding Declining Rates of Drug Overdose Mortality in Eastern Ky.;” click it to enlarge
—–

A decline in drug-overdose deaths in several Eastern Kentucky counties in the last decade was likely the result of state policies and strategies, stakeholders in the region told researchers for a newly published study.

The study looked at the two five-year time periods between 2008 and 2017, using data from an opioid mapping tool from the Walsh Center for Rural Health Analysis in the National Opinion Research Center at the University of Chicago and drug-overdose death data from the Centers for Disease Control and Prevention‘s National Center for Health Statistics.

The eight Eastern Kentucky counties with the greatest decline in overdose death rates between 2008-12 and 2013-17 were Clay, Johnson, Floyd, Magoffin, Breathitt, Bath, Powell and Letcher, according to the report.

The researchers from UK and NORC noted that the declines in overdose death rates in those Eastern Kentucky counties happened even as overdose rates went up across the nation, in the state as a whole, and in the Appalachian regions of neighboring states such as Ohio and West Virginia. 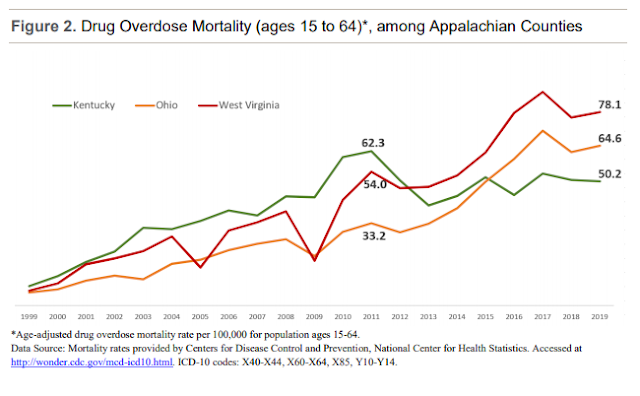 This prompted them to try to find out why, by asking key stakeholders in the Eastern Kentucky region what they thought was driving those declines. The stakeholders included representatives from criminal justice, prevention and education, economic development and recovery, substance use treatment, state and local health departments, health care and harm reduction.

The report details some policies, programs and interventions that key informants gave as reasons for why the region saw such declines. They include:

Shifts in drug-use patterns: “Across all sector types, interview respondents described the increased use of methamphetamines, in particular, as a primary contributing factor to reduced opioid mortality rates as access to prescription opioids declined,” says the report.

Improving prescribing behaviors:  “Many interview respondents indicated that less access to prescription opioids is likely contributing to the declines in drug-overdose mortality,” the report says.

In 2012, the General Assembly required health-care providers who prescribe controlled substances to use the prescription-drug monitoring program that the state created in 1998.

The legislature also limited who could own and invest in a pain clinic to being “only a physician having a full and active license to practice medicine.” A representative from the state Office of Drug Control Policy told the researchers  that “from 2011 to 2018, 100 million fewer dosage units of opioids a year were prescribed …we got rid of 36 pain clinics. Low-hanging fruit with that 2012 legislation.”

Increasing access to substance-use treatment: One of the major reasons given for the decreased overdose deaths in the region was the increased access to treatment for substance-use disorder that came from the Patient Protection and Affordable Care Act, fully implemented in 2014.

“The number of enrollees in Kentucky’s Medicaid expansion program receiving substance-use services increased by more than 700 percent between the first quarter of 2014 and the second quarter of 2016, from approximately 1,500 to more than 11,000 care encounters,” says the report.

Some respondents also noted the wide range of ways that people could access treatment in the region, whether from referrals from judges, law enforcement, harm-reduction sites or community organizations.

Focus on individuals in recovery: Several respondents said a focus on helping people in recovery gain work and housing, along with peer support, has contributed to the region’s decreased overdose death rate.

A stakeholder from the criminal-justice field noted that the Kentucky Chamber of Commerce’s efforts in this area, and another respondent said, “The willingness of employers to hire people with a record or a history of addiction has helped keep people in recovery, which ultimately would contribute to the decline in mortality rates.”

Evolving approach to criminal justice: Law-enforcement stakeholders told researchers that there has been a shift in how police officers interact with people who use drugs, noting that many of them now try to refer them to treatment, instead of immediately arresting them. The State Police Angel Initiative, started in 2016, allows anyone with substance-use disorder to come to a KSP post and get help to find treatment.

Others pointed out that judges across Eastern Kentucky have shifted from sentencing people who use drugs to prison, to sending them directly to treatment. A representative from Operation UNITE said every county in the Fifth Congressional District operates a drug court, as do 113 of the state’s 120 counties. Some noted that the effectiveness of these programs vary by county.

Expansion of syringe exchanges: Interviewees also attributed the low death rates to syringe-exchange programs, which they said provide a safe place for individuals who use drugs to learn about the resources available to help them.

As of October 2020, the report says Kentucky had 74 such harm-reduction sites, mostly in the eastern part of the state. The report notes that number was more than all neighboring states combined.

Longstanding political commitment:  Respondents described the “consistent and bipartisan” political support of state leaders as one of the reasons for the declining death rates. In particular, respondents said Fifth District U.S. Rep. Hal Rogers’ longstanding commitment to the issue was a reason for the decline. Rogers launched Operation UNITE in 2003.

“Prior to Medicaid expansion, Operation UNITE’s treatment vouchers were one of the main sources of funding for treatment and recovery services, making UNITE an essential stakeholder supporting Kentucky’s longstanding history of addressing addiction concerns,” says the report.

Stakeholders also pointed to former Gov. Ernie Fletcher’s efforts to facilitate continued growth of the recovery housing community in Eastern Kentucky and former Gov. Steve Beshear’s support of the ACA and his role in expanding Medicaid to more people in Kentucky.

Appalachian culture: Some stakeholders credited the resiliency of the Appalachian people, and others noted the importance of local coalitions and grassroots efforts to address substance use, as reasons for the decline in overdose deaths. Some of the respondents also talked about how reduced stigma has increased enrollment in treatment.

While the study acknowledges that the key respondents’ findings are based on their thoughts and opinions, it notes that many of the strategies thought to be successful in reducing overdose mortality in the region could be adapted and leveraged elsewhere.

“This story of success and progress in Eastern Kentucky highlights the strength and resilience of the Appalachian people, and shows what can be accomplished with collaboration, bipartisan support and a longstanding commitment to addressing substance use across the region,”  Michael Meit, NORC project manager and senior fellow, said in the news release.

Previous ArticlePandemic roundup: Ky. ranks 29th in full vaccination; U of L Health to require staff shots; daily new-case average below 400
Next ArticleStudy of 288 Covid-19 patients in Michigan found nearly half left hospital in worse physical condition than when they arrived