Kentucky Health News
Seeing acceleration of the coronavirus, driven by its highly contagious Delta variant, Gov. Andy Beshear and his team “strongly encourage” mask wearing by all unvaccinated Kentuckians and those in jobs with “significant public exposure.” But the overarching message continues to be “Get vaccinated.”
“The Delta variant is serious and it is even a deadly threat to non-vaccinated people,” Beshear said at a specially called press conference to focus on the threat of the Delta variant.
The recommendations include: 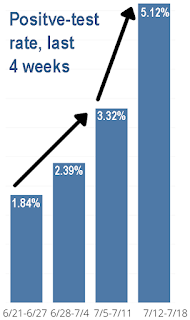 Cases in Kentucky have significantly increased for three weeks, going from 1,135 the week ending July 4, to 1,696 the following week to 2,992 last week. On Monday, the state reported 240 new cases, bringing average of the last seven days to 470, more than double what it was 10 days ago.

The share of Kentuckians testing positive for the virus in the past seven days has risen steadily over the past three weeks. It was 5.48% Monday, and went above 5% Sunday for the first time since Feb. 28.
As the virus has surged, vaccination rates have sunk to less than 6,000 a week. Health Commissioner Steven Stack said most of the state’s counties have rates below 40%, so “It is more likely than not that the person that you run into is unvaccinated, putting them at high risk for the Delta variant, which obviously can can spread and spread quickly.”
A vaccination rate of 70% is generally thought to be needed for herd immunity, but that number is often higher for highly contagious diseases. About 51% of the state’s population has received at least one dose of vaccine, and generally, the older the Kentuckian, the more likely he or she is to be vaccinated.
The three available vaccines all protect against the Delta variant to a large degree, but it is more contagious, which creates more “breakthrough” cases among the unvaccinated, Stack said. Still, there’s a big difference in being vaccinated and not vaccinated; Stack noted that even as the Delta variant spread in July, the infection rate among vaccinated Kentuckians was about one-sixth the rate among the vaccinated.
Stack reported that the state is seeing clusters of cases at close social activities such as camp, day care, congregate settings, businesses, places of worship and social events, and during travel. From May 31 to July 16, Beshear said there have been 34 cluster events with 335 cases, and 13 have occurred since July 5.
“We’ve got to be very careful about these settings, particularly the unvaccinated and the vulnerable,” he said.
Beshear was asked why he doesn’t mandate vaccines for people who care for highly vulnerable populations, such as health-care and long-term-care workers, Beshear they need to get vaccinated, but so does everyone else.. He said some employers have mandated vaccines, which is appropriate, but “We don’t think a mandate from state government would be effective and is not a step we’re taking.”
The statewide infection rate rose for the 11th straight day, to 9.90 cases per 100,000 residents. Counties with rates more than double that rate are Clay, 38; Muhlenberg, 35; Lewis, 32.3; Webster, 30.9; Hopkins, 30.1; Hart, 30; Washington, 27.2; Whitley, 26.4; Laurel, 21.8; Woodford, 20.3; Pulaski, 20.2; and  Livingston, 20.2.
Also going up are hospitalizations for Covid-19, reported at 337 on Monday, with 104 people in the intensive care unit and 38 of those on a ventilator. Hospitalizations have risen five days in a row, and the current weekly average of 285 is 56% higher than the average for the last week of June, 183.
Two of the state’s 10 hospital readiness regions are using at least 80% of their intensive-care-unit beds: the easternmost region, from Lee to Pike counties, at 84.6%, and Lake Cumberland, at 91.1%. Lake Cumberland is using 13.3% of its ICU beds for Covid-19 patients; in the westernmost region, which is closest to the national hotspots in Missouri and Arkansas, the figure is 16.7%, the state’s highest.
The state reported four more Covid-19 deaths Monday, five Sunday and eight Saturday, bringing Kentucky’s toll to 7,301.
In another plea to get people vaccinated to avoid the dangers associated with the virus, Beshear said, “Folks, it’s entirely avoidable, which it wasn’t in the past. The hospitalization numbers, the death numbers, the  ICU numbers, are totally avoidable if you get vaccinated.”
Previous ArticleMore Republicans join Biden and health experts in going after vax misinformers; McConnell is more reserved; Paul is a chief skeptic
Next ArticleMcConnell says to ignore ‘demonstrably bad advice’ from vaccine skeptics, and get vaccinated to control the pandemic