Kentuckians’ lack of vaccination for the coronavirus stems mainly from worries about side effects, distrust of the vaccines and government. They’re also waiting to see if the vaccines are safe, and some people think they don’t need to be vaccinated.

Those were the main reasons mentioned by Kentuckians responding to the Census Bureau‘s regular Household Pulse Survey, taken June 23 through July 5.

Distrust of the government was higher in Kentucky, 39 percent, than any state but Minnesota, where it was 41%. Nationally, it was 28%.

People surveyed gave more than one reason for not getting, or not planning to get, a vaccine.

The leading reason in Kentucky (58%) and nationally (54%) was worry about side effects. Health experts say potential effects of the Covid-19 disease are worse than any side effects, with are usually mild.

The second leading reason in Kentucky was distrust of the vaccines, at 43%. That was more common in 10 states: the Dakotas, Minnesota, Maryland, Arkansas, Montana, Mississippi, Washington, Kansas and South Carolina.

The percentage of Kentuckians who don’t think they need a vaccine (a mistaken belief, medical people say) is smaller than nationwide, 21% to 26%. In Kentucky, 21% also said they don’t know if the vaccines will work. Health experts say they have been proven to work over and over again.

The hesitancy or resistance to vaccines goes beyond those for the coronavirus. Almost 17% of Kentuckians in the survey said they don’t like vaccines. Other answers included the lack of their doctor’s recommendation (6.2%), “other people need it more right now” (4.6%) and cost (2.2%). The vaccines are free, and health officials say there is more than enough vaccine for everyone.

According to the U.S. Centers for Disease Control and Prevention, 54% of Kentuckians have received at least one dose of a Covid-19 vaccine, and 46.4% are fully vaccinated. The national rates are 59% and 50.4%, respectively. Among Kentucky’s vaccine-eligible population, 12 and older, the vaccination rate is 63.3%.

Daily vaccinations increased in Kentucky increased over the last month, peaking Aug. 7 with 21,665 doses, raising the seven-day average to 11,957. The numbers have mostly declined since, and the daily average is now 9,658, about where it was July 2, before the major surge in coronavirus cases began. 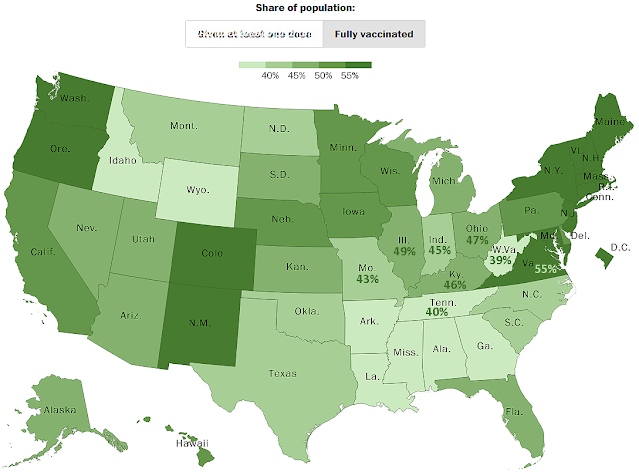 Previous ArticlePediatricians cite rising cases of Covid-19 cases in youth as cause for worry, say vaccines make it largely preventable
Next Article‘Get your shot. Today!’ Rep. Rogers urges at groundbreaking for hospital-linked clinic in McCreary County, which has no hospital