One reason many Kentuckians are resistant to coronavirus vaccination is people like Josh Stacy.
“I feel there is more to it than just getting a shot,” Stacy told Brandon Roberts of Spectrum News. “The government doesn’t do anything with your best benefit in mind.”
Stacy’s feelings about government are common in Kentucky. In a national poll, the state ranked second only to Minnesota in the percentage of people who said they weren’t vaccinated or planning to be because they distrust government.
Stacy also has reservations based on religion.
“I’m a Christian, and I also think that this is going to lead to other things,” he said. “I’m not saying this vaccine is the Mark of the Beast, but it can lead to that. It says in the Bible [the Mark of the Beast] will be placed in your right hand or forehead. We haven’t gotten that far yet, but it is leaning that way. You won’t be able to buy or sell anything without the mark.”
Roberts interviewed Stacy, a fellow Pike County native, to localize a story about another national survey that showed rural parents have more reservations about the vaccines than those in cities and suburbs. Stacy, 43, asked that his exact address and occupation not be reported, Roberts told Kentucky Health News.
Stacy “has lived and worked in the mountains of rural Eastern Kentucky his entire life,” Roberts reports. “He and his wife, Tomi, are the parents of two daughters, ages 13 and 5. He said none of them have gotten or will get the vaccine. . . . Stacy’s doubts about the vaccine have only intensified recently, as his vaccinated mother and stepfather are currently battling Covid-19.”
Stacy told Roberts, “There is not a 100 percent guarantee you will not contract the virus even with the vaccine.” That is true, but unvaccinated people are about four times more likely to catch the virus, and about 10 times as likely to be hospitalized with Covid-19.
Stacy also said, “It’s not like chickenpox, tuberculosis, or anything like that. This virus is man-made, and I feel that the government and certain elites in this country are about population control.” U.S. intelligence agencies have ruled out the possibility that China developed the virus as a bioweapon, “but the agencies failed to reach consensus on the virus origin, according to key takeaways from a classified report delivered to President Biden,” The Washington Post reports.
Stacy’s concern about the Antichrist (“the beast” in the Book of Revelation) is common in many fundamentalist churches that regard the book as prophetic about modern times, and Kentucky is more religious than most states. “Stacy’s faith . . . plays a significant role in his decision not to get the vaccine. Strong adherence to one’s religion is prevalent in rural America, but was not a factor the study considered,” Roberts reports for Spectrum News, a service of cable-TV firm Charter Communications.
The study found that rural parents shared the same concerns as parents in cities and suburbs, but to greater degrees. They were 10 percentage points more likely than urban parents to say they were concerned that the vaccines have been tested enough (58% to 48%), nine points more likely to wonder whether the vaccines actually work (51% vs. 42%) and what long-term health effects they might cause (56% vs. 47%), and eight points more likely say they were concerned about how new the vaccine is (52% to 44%).
The survey was conducted online by researchers at Northeastern University, Harvard University, Rutgers University and Northwestern University June 9 through July 7 among 20,669 people, using quotas to reflect race, ethnicity, age, and gender in each state. The data were weighted using data for race, ethnicity, age, gender, education, and residency in urban, suburban or rural areas. It was funded by the National Science Foundation. 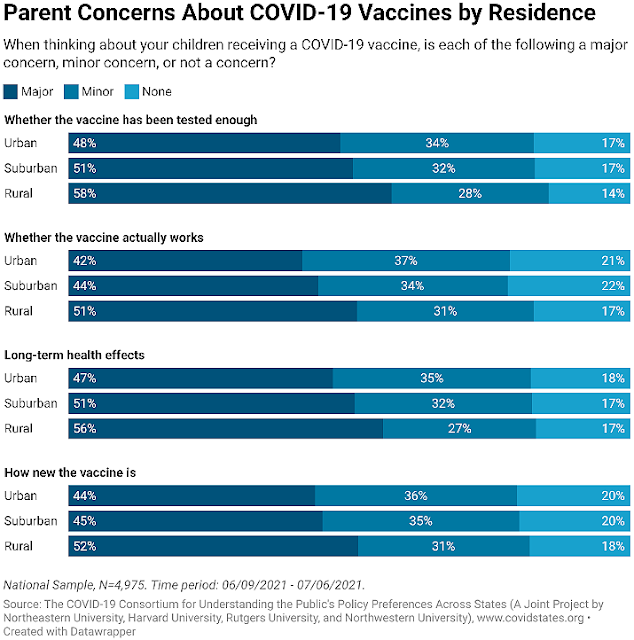