Dept. for Public Health graph, adapted by Ky. Health News; for a larger version, click on it.
—–

With 69% of Kentucky’s acute-care hospitals reporting critical staffing shortages, “Our hospitals are at the brink of collapse in many communities,” state Public Health Commissioner Steven Stack said Monday.

At his weekly pandemic media briefing, Gov. Andy Beshear also presented an emotional message from a health-care worker who talked about “the heartbreak that she encounters on almost a daily basis,” as Beshear put it.

Laura Gevedon, shift supervisor on a Covid-19 unit at Pikeville Medical Center, broke down in tears several times in a three-minute video while telling what it is like to take care of Covid-19 patients.

She closed by saying that all patients regret not getting vaccinated.

She added, “Get a vaccine and wear a mask. That’s all you can do. It is the best prevention that anybody can have. That’s the best treatment for Covid. And the only true cure for Covid is prevention.”
Gevedon works on a unit that had been converted from cardiothoracic and vascular treatment to Covid-19, and she said every bed was full.
Beshear said 66 of the state’s 96 acute-care hospitals are reporting critical staffing shortages, the most yet.
But even as the governor and his health commissioner sounded the alarm, all three Covid-19 hospital metrics fell from records set Friday. Hospitals reported 2,446 Covid-19 patients, down 95 from Friday; 646 in intensive care, down 52; and 411 on mechanical ventilation, down 37.

Only two hospital readiness regions are using less than 86% of their intensive care unit beds. They are the northeast region and and the easternmost region, from Lee County to Pike County.

After saying some hospitals are near collapse, Stack said, “It’s causing consequences to people not just with Covid, but also to people without Covid who can’t get some of their procedures or hospitalizations taken care of, or have a heart attack or a stroke addressed in a timely manner because there simply are no places for these patients to get their care.”

Beshear reiterated his plea for Kentuckians to “break the Thanksgiving dinner rule” and talk to their loved ones about the importance of getting vaccinated, saying that those who would be influenced by him and other local leaders have likely already been vaccinated. “Only you can make the difference,” he said.

Biden’s mandate: Asked by Kentucky Health News if he supports the vaccine mandates announced Friday by President Biden, Beshear equivocated, saying not all the details are clear yet.

He said Biden’s vaccine mandate for any business employing more than 100 people should instead be called a testing requirement. “Your employer has, I think, a rightful desire to keep you safe, but also if you’ve chosen not to get vaccinated, not to infect the rest of the workforce,” he said. “So I think the controversy that comes around it is more of the name than what’s being asked.”

Legislation legal? Beshear was asked whether any of the measures the General Assembly passed last week to limit his authority to manage the pandemic, including the ability to require statewide masking or universal masking in schools, fell outside his call for the special session, which would be outside the law.

“I think it would ultimately fall to a court to decide if something was in or outside the call. I haven’t looked at any of that law right now. I don’t see a challenge coming from my office,” he said.

“I certainly hope and pray that every school district makes the only decision that protects children and don’t try to convince themselves that somehow you can protect children by letting a one every one-hundred year pandemic run through your school [in a] poorly ventilated building with unvaccinated kids.”

Masks and kids: Stack, who is a physician, also stressed the need for schools to maintain universal masking if they want to maintain in-person classes.

Stack said his department’s advice is “unwavering and unequivocal” for universal masking in schools. “You have to wear these masks when you’re in school,” he said. “That’s how kids stay in school.”

Those messages came as a second staff member In Lee County died from Covid-19 since the school year began, reports the Louisville Courier Journal. Since Saturday, there have been 68 more Covid-19 deaths, with 29 reported on Monday. The death toll in Kentucky from the disease is 8,071.

“So again, don’t fool yourself,” Beshear said. “I heard a whole lot last year about how Covid doesn’t spread in schools. Covid spreads everywhere, anywhere it can. It doesn’t have any rules other than it will do what it takes to kill as many of us as it can — which means we have to make good decisions, smart decisions.”

Daily numbers: The state reported 2,426 new cases of the coronavirus Monday, bringing the seven-day rolling average of cases to 3,897. That’s 11.4% less than the record average of 4,398 set eight days earlier.

However, Beshear said the Labor Day holiday may have delayed discovery of cases. “Covid is as bad in Kentucky as it has ever been in this pandemic,” he said. “Right now, sadly, we are one of the hottest states in the country.”

However, the share of Kentuckians testing positive for the virus in the last seven days has dropped for the last five days and is at 13.7%.

The New York Times continues to rank Kentucky third for its case rate, and places six Kentucky counties in the nation’s top 10: Perry, Clay, Whitley, Russell, Grayson and Rockcastle. (The Times and state rankings vary due to methodology; the state says it removes duplicates from test results.)

In partnership with Volunteers of America Mid-states and the Kentucky Association of Health Plans, Clay County recently launched a “Take 1 for the Team” campaign for vaccination; the latest event announced is an Ohio Valley Wrestling event, with on-site vaccinations available Friday, Sept. 17.

Since the initiative was launched, Christie Green of the Cumberland Valley District Health Department said in a news release, the percentage of the population receiving at least one dose has gone from 33% at the end of August to 39.8% as of Sept. 10. Monday’s figure was 40.6%.

The statewide one-dose figure is 59%. Woodford and Franklin counties lead with 75%; Spencer, Lewis and Christian counties are at the bottom with 31%.

The state’s daily vaccination average has slipped in the last week, but its rate of full vaccination has finally reached 50%, according to Centers for Disease Control and Prevention data in The Washington Post: 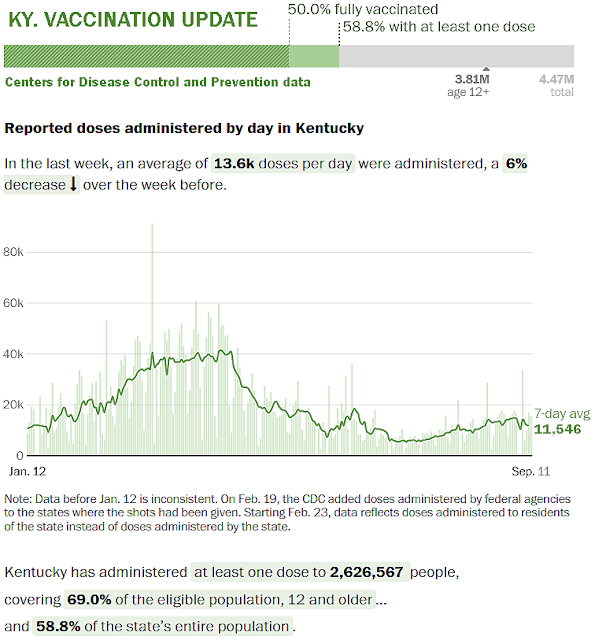 Previous ArticleStudies show that properly wearing masks slows the spread of the coronavirus, as part of a multi-layered prevention approach
Next ArticleCases and hospital numbers tick up again; state’s 7-day infection rate is second in nation; positive-test rate declines again