The annual County Health Rankings & Roadmaps report, showing how the health status of every county in the United States compares to that of every other county in the state, has been released.

Many Kentucky counties showed little change, but 76 of the state’s 120 counties shifted up or down by at least 10 notches in the rankings, which essentially measure of how long and how well we live.

The rankings measure health outcomes, gauged by life expectancy and measures of quality of life; and health factors, such as access to physicians and areas to exercise, tobacco use, children living in poverty, violent crime, long commutes and other environmental factors. The report is issued by the Robert Wood Johnson Foundation and the University of Wisconsin Population Health Institute.

The rankings are meant to be viewed more as a general categorization of a county’s health status, rather than making specific comparisons with counties that are relatively close in the rankings. Because the differences in rankings for most counties are so small that they are statistically insignificant, the researchers have placed counties in four groups of 30 counties each, called quartiles (each with one-fourth of the total of 120 counties).

The bottom quartile for both health outcomes and health actors in Kentucky continues to be made up of almost entirely Appalachian counties. The exceptions for health outcomes are Carroll County, between Louisville and Cincinnati, and Fulton County, at the state’s western tip. The relatively poor county is the only non-Appalachian county in the bottom quartile for health factors.

Oldham and Boone, two of Kentucky’s wealthiest counties, continue to be the top two in health outcomes, as they have been since 2011. No. 3, Scott County, has ranked between fifth and eighth since 2011. Campbell County in Northern Kentucky ranked fourth for the second year in a row and Calloway County, home of Murray, ranked fifth after moving up 19 notches from last year’s rankings.

Oldham and Boone are also the top two counties for health factors, and have been since 2015. They have been in the top five since 2011. Woodford, Campbell and Fayette counties are ranked third, fourth and fifth, respectively, for the second year in a row.

The bottom five counties for health factors are Breathitt, Lee, Clay, Harlan and McCreary, all in Appalachian Kentucky.

Some big changes in health outcomes

Breckinridge County also saw a 37-notch gain (to 35th from 72nd) in outcomes that moved it into the second quartile.

Because the rankings are relative, county to county, they tend to have about as many drops as gains. Bracken County saw the greatest drop in health outcomes, 46 notches, to 81st from 35th. Clark County had the second greatest drop for outcomes (30th to 70th), moving from the first quartile to the third.

Two Appalachian coalfield counties also saw big drops in outcomes, which moved them into the bottom quartile. Johnson fell to 96th from 71st, and Whitley dropped to 100th from 67th. 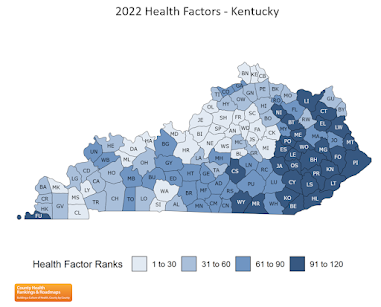 Some big changes in health factors

Allen County’s 17-notch improvement in health factors moved it into the 55th from 72nd, and into the second quartile. Simpson County moved into the first quartile by rising to 29th from 39th.

The report challenges Kentucky counties to take this data and turn it into action. Evidence-based resources to do that can be found in the “Take Action To Improve Health” section of its website. Here are the rankings (click image to enlarge): 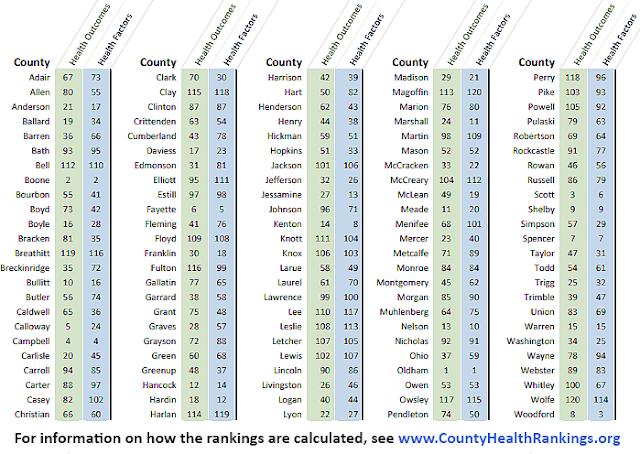