By Al Cross
Kentucky Health News
The current state of Kentucky’s law on abortion is “the most extremist in the nation” because it is bans almost all abortions with no exceptions for cases of rape or incest, Gov. Andy Beshear said Thursday.
At his regular weekly press conference, Beshear was asked for his reaction to the defeat Tuesday in Kansas of a constitutional amendment similar to one on the Nov. 8 ballot in Kentucky, which would negate a preliminary court ruling that two state abortion laws probably violate the state constitution’s privacy and religious-freedom provisions.
The temporary injunction, issued by Jefferson Circuit Judge Mitch Perry in a lawsuit by the state’s two abortion clinics, has been blocked by state Court of Appeals Judge Larry Thompson of Pikeville pending the court’s consideration of an appeal and a request to toss the case to the state Supreme Court.
That makes abortion illegal in Kentucky, except to save the woman’s life or prevent permanent damage to a life-sustaining organ, under a “trigger law” the General Assembly wrote to take effect if the U.S. Supreme Court overturned its 1973 Roe v. Wade decision for abortion rights, which it did on June 24.
“I believe that most Kentuckians view the current state of reproductive health in Kentucky as extremist,” Beshear said. “I believe people should go thinking about that constitutional amendment with regards to the trigger law. . . . If that constitutional amendment passes, it will make the trigger constitutional, if it is not” under Perry’s ruling.
“The trigger law is, I think, the most extremist in the nation,” Beshear said. “It means that rape victims have no options. It means that victims of incest have no options. . . . They deserve options. I think the vast majority of Kentuckians agree the current state that we’re under right now is extremist, and I don’t think most people out there like extremism.”
Beshear generally favors abortion rights, but not late-term abortions. He did not give a reaction to the Kansas referendum, in which voters defeated by 3 to 2 a constitutional amendment that would have negated a Kansas Supreme Court decision that said the state constitution creates a right to abortion.
The amendment on Kentucky’s ballot would likewise negate Perry’s ruling or any appellate-court ruling upholding it.
Beshear also did not respond to a question about The New York Times‘ state-by-state estimates of the likely outcome in similar referenda in each state, which predicted that the proposed amendment would be defeated, by a vote of 53 to 47 percent. Here’s an adapted version of the Times map with its estimates; for a larger version, click on it. 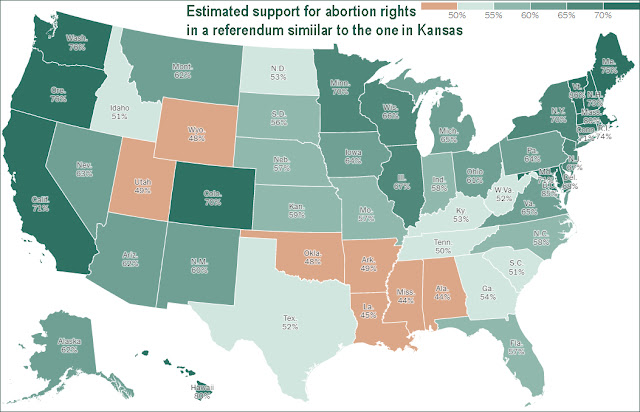 Previous Article‘Children are not little adults’ and need special care in heat waves
Next Article9 counties drop to low risk of Covid-19, but 80 remain at high risk; Kentucky infection rate second highest among the states