The annual Kids Count Data Book on children’s well-being, released Aug. 8 by the Annie E. Casey Foundation and Kentucky Youth Advocates, again ranks Kentucky 37th in the nation for the overall well-being of its children.

Overall, Kentucky saw improvement in 10 of the 16 indicators, did worse in four and stayed the same on one. One indicator did not show a comparison.
“Though the commonwealth made progress on a number of indicators of child well-being over the past decade, rankings continue to show that we are not making progress as quickly as other states,” KYA Executive Director Terry Brooks said in a news release. “In fact, Kentucky is in the bottom 10 of states for six of the 16 indicators.”
Nearly one in four Kentuckians are children. Here is a look at each domain.
Health: Kentucky’s health ranking dropped for the second year in a row, with two of the indicators used to measure it worsening. This year’s report ranks the state 38th, down from 35th in last year’s report. The year before, Kentucky’s health ranking plummeted from 25th to 42nd after Kids Count changed measured childhood obesity instead of youth alcohol and drug abuse.
This year’s report says 39% of Kentucky’s children were either overweight or obese in 2019-20, up from 37% in 2016-2017. The national rate is 32%. Kentucky continues to have the highest obesity rate in the nation in children 10 to 17.
Kentucky also saw an increase in the rate of deaths of children per 100,000 residents 19 and under. That rate increased to 35 deaths per 100,000 in 2020 from 32 per 100,000 in 2010. The national rate is 28 deaths per 100,000.
The good news is that Kentucky continues to have a low rate of children without health insurance, 4%. The national average is 5%.
Another indicator of children’s health is the rate of babies born weighing less than 5.5 pounds. That rate was 8.5% in Kentucky in 2020, slightly lower than in recent years. 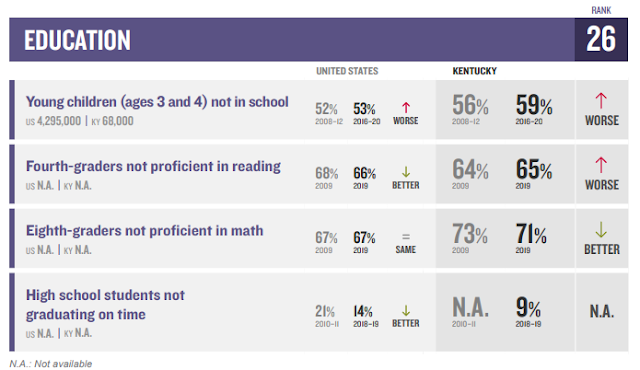 Education: Kentucky ranked 26th in the report’s Education domain, up from 30th last year.
The good news is that 91% of the state’s high-school students graduate on time, well above the national rate of 86%.
Also, the state saw a slight decrease in the share of Kentucky eighth-graders who were not proficient in math, dropping to 71% in 2019 from 73% in 2009. And while that’s good news, it still means only 29% of them are proficient in math.
Two indicators in this domain worsened. The share of preschool-age children not in nursery school, preschool or kindergarten increased to 59% in 2016-20 from 56% in 2008-12. And the share of fourth-graders not proficient in reading inched up to 65% in 2019, from 64% in 2009. 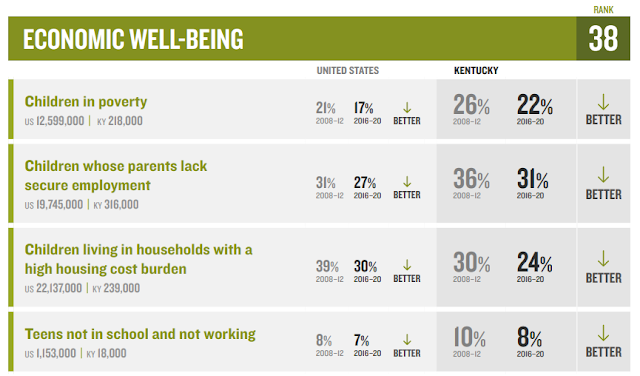 Economic well-being: Kentucky ranks 38th in economic well-being, up from 40th in last year’s report, with all four indicators showing improvement since 2008-2012.
The percentage of children in poverty dropped to 22% in 2016-20, from 26% in 2008-12; children whose parents lacked secure employment dropped to 31% from 36%; and teens not in school and not working dropped to 8% from 10%.
Also, the percentage of children living in households with a high housing cost burden dropped to 24% in 2016-20 from 30% in 2008-2012. A high housing-cost household is defined as one where more than 30% of monthly household pre-tax income is spent on housing-related expenses, including rent, mortgage payments, taxes and insurance. 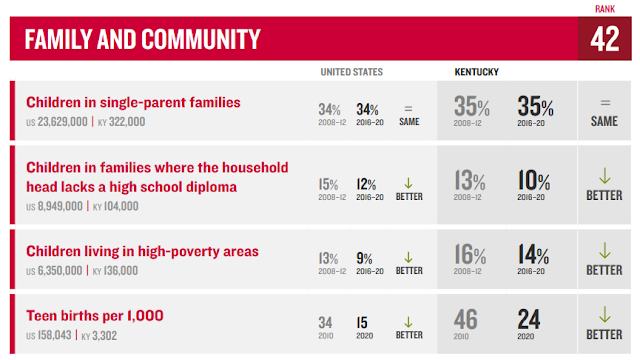 Family and Community: Kentucky ranked 42nd in the family and community domain, up from 43rd in last year’s report.

In 2020, there were 24 births per 1,000 females aged 15-19. In 2010, that number was 46 per 1,000. The current national average is 15 per 1,000.
The percentage of children living in single-parent homes in 2016-2020 stayed the same as it was in 2008-2012, 35%.
Focus on mental health
For the first time, the annual Data Book focuses on youth mental health, noting that the number of young people with mental-health issues was high before the pandemic, and has only gotten worse.
“The coronavirus upended everyday life to an extent not seen since World War II,” said Lisa M. Hamilton, president and CEO of The Annie E. Casey Foundation. “It is no surprise that millions of parents, caregivers and other adults are feeling overwhelmed. So are children, who face what the U.S. surgeon general has called a ‘mental health pandemic’ for youth.”

The Data Book reports that children across Kentucky and the nation were more likely to encounter anxiety or depression during the first year of the pandemic than they were before.

In Kentucky,  there was a 28% increase in the number of children aged 3 to 17 who had been diagnosed with or reported to have anxiety or depression by a doctor or a health-care provider between 2016 and 2020. The share increased from 12.4% to 15.9%.
“This increase represents 29,000 more children who are struggling to make it through the day,” KYA said.
Brooks said, “The pandemic years have taken a toll on everyone — from our health professionals and educators to our families — including the rising crisis in mental health for children and youth. And, in addition to experiencing mental health challenges as a result of the pandemic, children still contend with the conditions that were making life harder well before the coronavirus — such as poverty, community violence, and hunger. Policymakers must continue to prioritize policies and investments that ease mental health burdens on children and their families — and don’t leave anyone behind.”
Call for action

KYA called on the state legislature and Congress to prioritize the basic needs of Kentucky’ children, including policies to ensure financial stability for families and that ensure access to nutritious foods, stable housing and safe neighborhoods. KYA also calls on the state to ensure that every child has access to trauma-informed mental-health care that is available when and where they need it.

“All kids deserve the chance to thrive, no matter their zip code, race, or family’s income. That vision will only come to fruition when our lawmakers prioritize what’s best for all kids and families,” said Brooks. “That means that Kentucky laws are written by Kentuckians and not by external national groups. That means the interests of vulnerable kids are the priority and rather than succumbing to the influence of dark money. Whether you are an elected legislative leader or a candidate for governor, there can be no more ethical priority than the interests of Kentucky’s boys and girls.”

Previous ArticleNew coroanvirus cases went up again last week, after a week of decline; N.Y. Times says state’s infection rate is still 2nd highest
Next ArticleKy. has a nursing shortage; SOAR issues a plan to address the issue in the east, where health care is the main employer