This fund is for journalists who cover a lot of territory with limited resources. It has one main purpose: To help unearth important stories that otherwise won’t get told. R-CAR fellows spend five days learning how to build and query databases at Investigative Reporters & Editors Inc. in Columbia, Mo. They emerge with the tools to convert spreadsheets into sources. Fellows are chosen based on their journalistic ability, motivation, and ideas to pursue stories of consequence for their communities.

A young reporter who won a Pulitzer Prize and other awards for a series in Appalachia has donated $10,000 in prize money to help other rural journalists get the same kind of training that enabled him to do his prize-winning work.

Daniel Gilbert and the Institute for Rural Journalism and Community Issues have created the Fund for Rural Computer-Assisted Reporting to finance fellowships for rural journalists to attend the computer-assisted reporting boot camps of Investigative Reporters and Editors Inc.

The techniques Gilbert acquired at a CAR boot camp proved crucial in his reporting that exposed mismanagement of natural-gas royalties owed to landowners in Southwest Virginia. The series in the Bristol Herald Courier won the 33,000-circulation newspaper the 2010 Pulitzer Prize for Public Service, and earned Gilbert the $10,000 prize for Community Journalism in the National Journalism Awards sponsored by the Scripps Howard Foundation.

Gilbert, 28, assigned the Scripps prize to the endowment of the Institute for Rural Journalism and Community Issues, based in the School of Journalism and Telecommunications at the University of Kentucky. Gifts to the endowment through April 2011 are matched by the Research Challenge Trust Fund of the Commonwealth of Kentucky, so the institute’s Fund for Rural Computer-Assisted Reporting starts with $20,000. Earnings from that amount will fund at least one fellowship per year for a rural journalist to attend a CAR boot camp, for which IRE will discount the registration fee as part of the fellowship.

“It will be something of great benefit for communities that aren’t served by major newspapers,” said Gilbert, at left in photo. 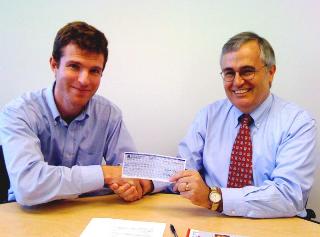 “We hope others will follow Daniel’s example and contribute to the Fund for R-CAR,” said Institute Director Al Cross, at right in photo. “His generous donation is more than a lasting legacy to rural journalists. It is a reminder of the challenges they face – lack of resources, time and support – but also the opportunities they have, if given the right tools, to render great public service.”

IRE Executive Director Mark Horvit said likewise: “Daniel and the Herald Courier showed that doing great work with major impact is not dependent on the size of a news organization. If smart, dedicated journalists are given the  training and tools they need, anything is possible.”

Gilbert, who is leaving Bristol for Houston to cover the oil and gas industry for The Wall Street Journal, announced the Fund for R-CAR in his final article for the Herald Courier on Sept. 26, 2010.

“Journalism in the public interest should spring from need, not from superior resources,” he wrote. “Nowhere is this brand of reporting needed more than in rural areas, like Southwest Virginia, that are not covered in any depth by powerhouse media outlets. As the reach of these outlets continues to shrink, the watchdog role in rural communities increasingly falls to the local newspaper, television station and website.”

The CAR training enabled Gilbert to use data from the Virginia Division of Gas and Oil to compare gas production by well with royalty payments that had been paid into escrow because of disputes over ownership of the gas. The fund had grown to $23 million, and Gilbert found that “Companies had not made any deposits at all into a significant number of accounts,” he wrote in a story for the R-CAR website. “The subsequent articles, which combined data analysis with a year’s worth of shoe-leather reporting, resulted in energy companies quickly depositing into escrow more than a million dollars in outstanding royalties. Lawmakers responded with legislation to facilitate the release of royalties in escrow to property owners, and state officials implemented measures to improve compliance.”

The Scripps prize was the first earned by Gilbert’s eight-part series. Speaking to a Society of Professional Journalists meeting at the Scripps Convergence Lab in the University of Tennessee College of Communication and Information, he said, “When money from journalism comes along … it made sense to me to keep it in play.”